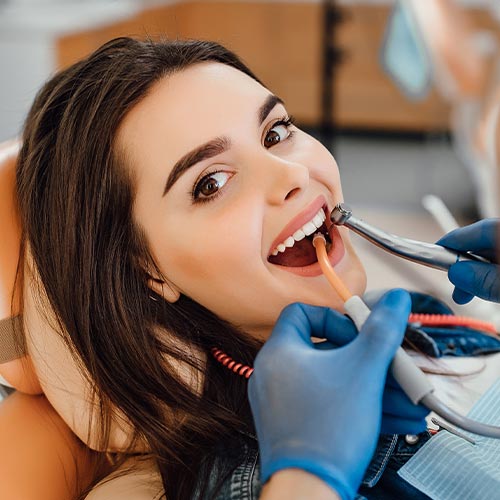 Periodontal disease affects 50% of all Americans age 30 and older. Without Periodontal Treatment you can have tooth loss, the need for dentures, and an array of additional health issues. Because of its potential severity, it is important that it is treated seriously, despite how common the disease is reported to be. It does not discriminate and can affect anyone of any age or sex.

What Is Periodontal Disease?

Gum disease is a gum infection that is ongoing. It affects, not only the gums, but the jawbone as well and can lead to tooth loss, as well as overall systemic issues. Typically the result of poor brushing and flossing habits, periodontal disease occurs after plaque has built up and hardened. There are four overall stages of periodontal disease, with only one being reversible.

Causes of periodontal disease all boil down to bacteria. If plaque and tartar are not regularly removed (using good daily flossing and brushing habits, as well as regular professional teeth cleanings), gum disease will occur. Smoking is the most significant risk factor and can make periodontal disease treatment less effective. Other factors that increase one’s risk for gum disease include diabetes, medications that reduce the natural flow of saliva, genetics, hormonal changes, and certain illnesses like AIDS.

Gingivitis is the only stage of periodontal disease that is reversible as it has not yet had time to attack the bones. It is the result of a buildup of plaque around the teeth. There are only a few signs at this stage and most are painless. This is what makes periodontal disease so common and so concerning. It is silent until it is not. Periodontal disease does not typically break its “silence” until the fourth and final stage. Beginning signs to watch out for include bad breath on occasion, swelling and redness of the gums, and bleeding when brushing or flossing. Good overall oral hygiene and regular checkups can treat and reverse gingivitis.

Slight periodontal disease is the second stage of periodontal disease. It is not reversible, but it is manageable. Once a patient reaches stage two, the infection has spread to the bone and begins its bone-destroying process. The bacteria evolves and becomes more aggressive, which is what causes the additional bone loss. Simple oral hygiene will no longer cut it. Signs include increased swelling or redness of the gums, bad breath, bleeding during brushing or flossing, and probing depths that are between four and five millimeters.

Like slight periodontal disease, the third stage of periodontal disease cannot be reversed. At stage three, the same symptoms as stage two occur but probing depths are greater at six to seven millimeters which allows for even more bacteria to attack, not only your bones, but

Your blood stream and immune system as well. Treatment for stage two and stage three periodontal disease consists of scaling and root planning. Scaling and root planning are forms of deep cleaning that remove the deposits of bacteria that are deeply rooted in your gums. If left untreated, these stages can progress to bone and tooth loss, gum sensitivity, increased bleeding, and the shifting of teeth.

The final stage of periodontal disease occurs when the infection deepens even further and the bacteria, once again, evolves into disease-causing bacteria. You are now at a 50% – 90% risk of bone loss. In addition to bone loss, advanced periodontal disease causes red, swollen gums that ooze pus, cold sensitivity, further loosening of teeth, painful chewing, and severe halitosis. This stage requires periodontal surgery or periodontal laser therapy in order to clean the deep bacteria-filled pockets that have formed. If left untreated, stage four periodontal disease leads to spacing or gaps between the teeth, gum recession, patients needing dentures, and other overall health problems that can be serious.

The best dentist in miami thus far. Dr Shana is professional and knowledgeable and above all a kind person who practices her profession with so much kindness. Her office is immaculate and her team members are wonderful as well, attentive, professional and on point. At the arrival of my visit I had a package waiting for me to complete and I was attended at my scheduled time. dr Shanna took her time and examined me and gave her diagnosis (all good). The dental hygienist was awesome and did a great job and also Maria the receptionist. This office has ample convenient parking and it’s in a great location ! Highly recommend Beach Smile Family Dental

Vero Lemos
Best dentist and orthodontist in the business. Been with them for over 10 years!

Duke Locke
I am absolutely delighted with Beach Smiles Dentistry from the sleek ultra-modern decor to the welcoming support staff. Their operation is extremely efficient. I have never had to wait more than a few minutes before being seen by the dentist. The support staff is professional and friendly. Most importantly of course is the skill level of the dentist. Dr. Bernkrant is the best dentist that I have ever had the pleasure to have worked on my teeth (Can you believe I'm using the word "pleasure" when referring to a dentist?!!) She is a true artist. I have always been ashamed of my smile, always hiding my teeth when being photographed. Dr. B has given me a new lease on smiling. She has spent hours at a time working to make sure that the results are perfect. I am forever in her debt. P.S. Her technique in administering numbing injections is painless!!

Ana Rivadeneira
Love this office! It makes you feel so relaxed , and the doctors really make magic happen ! Dr b is amazing and her staff!

Elizabeth Perez Gomez
I have to say the best experience I’ve ever had at a dental office . And everything was so clean and beautiful. My new dentist from now on!

maiber pereda
They literally make you feel part of the family, and the best cleaning ever !

lianny arcia
The best office in south Florida ! They make you feel like home!! The doctors and staff is amazing !

Yessi O
Very nice and upscale office. Dr. B is the best!!! I recommend this office to any and everyone!!!

Brittney Rayford
Google rating score: 4.9 of 5, based on 97 reviews

It will take only 30 min only

Your info is totally safe and secured